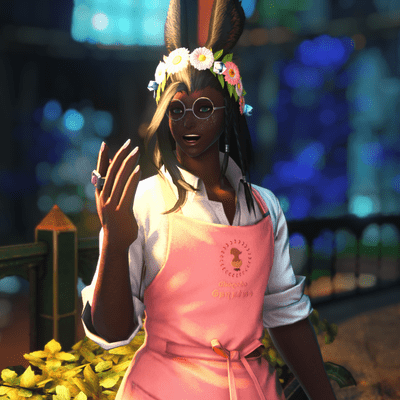 Chin hails from a smaller viera village that is something of an outlier: almost all members born in the village are women. Outsiders would likely refer to some of them as trans women, but it is the village's belief that all begin life as a woman, and most freely choose to remain that way.

Chin, of course, is an exception. The rava word is untranslatable, so they usually refer to themself as third gender or nonbinary. While third gender viera are uncommon, they are seen as blessings from the twelve. In his daily life, this mostly meant that Chin grew into a jack-of-all-trades role in the village, meant to pitch in and help wherever the defecits might be.

For reasons they haven't divulged, Chin left home and eventually made their way to Old Sharlayan. They secured their residency by virtue of being from a relatively unheard of village; their knowledge would be freely shared for the benefit of the nation, and in exchange, they were granted enrollment in the Studium, where they would go on to study the healing arts.

Still unsure of what I'm putting here. For now, have a donation link: