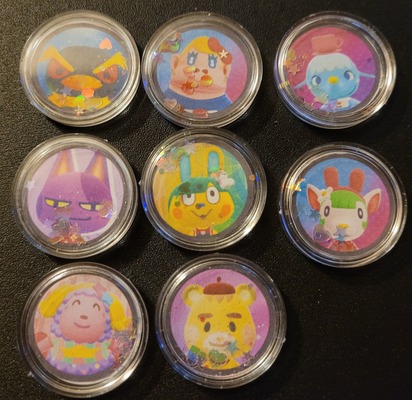 You probably already knew this existed, right? Anyone who's taken one look at the price of a Punchy card on eBay knows the official Animal Crossing cards are too expensive. There are lots of amazing sellers on shops like Etsy who make high quality 'amiibos,' but I'm broke, so initially, I was emulating via Joycondroid. Unfortunately, a Switch firmware update rendered it obsolete, so I had to get creative. So, after some poking around online, I was able to make my own Amiibo coins! This isn't a tutorial so much as a compilation of resources and tips; hopefully it will help you!

What you need (bare minimum):

The gist of it is (1) pick a villager, or really, any Amiibo you want to write, (2) load their bin file in Tagmo, and (3) write to a blank NFC tag. If you're looking for a more in-depth tutorial, this one for Tagmo is great! If you'd like to actually make your own coins, you will also need the following:

One issue I kept running into was that most of the templates I found online used art from a Tumblr account that no longer exists. As such, I ended up having to manipulate my own images. I ended up cropping the full-size villager renders into a headshot. You can pick your villagers from this list and download their offical render. For backgrounds, since I was making these for personal use, I literally just went on DuckDuckGo, browsed desktop or phone wallpapers that I liked, and cropped them to fit in the template. So long as your layers are in the correct order, it's really easy to erase anything that overflows beyond the coin template.

For assembly, I kept mine simple; all I did was cut the coins out, stick the NFC sticker to an unprinted side, glued them together with some basic stick glue, then put a few bits of glitter in for decoration. This video tutorial is a good visual reference.

And that's it! Tinker around and put your favorite villagers into your town!

Still unsure of what I'm putting here. For now, have a donation link: